A grateful recipient shares why plasma is important

After decades of chronic illness, Nadine Law celebrated a milestone birthday thanks to plasma donors

Age 50 is an important milestone birthday for most people, but for Nadine Law it was extra special. She suspects she would not have reached it without help from plasma donations.

“I didn’t thrive as a child or even into adolescence. I was so underweight and constantly sick with lung and throat infections,” says Nadine, who lives in Sudbury, Ont. “I was always at the doctor and my ailments never seemed straightforward. At the age of 20, I lost half my left lung due to a rare reoccurrence of it collapsing.”

For the next two decades, Nadine’s health would continue to deteriorate. She was diagnosed with multiple autoimmune diseases before finally being diagnosed with common variable immune deficiency (CVID) in her early forties.

Common variable immune deficiency is a type of primary immunodeficiency, an immune system dysfunction typically caused by a mutation in a gene or genes. It is characterized by low levels of specific proteins (immunoglobulins) in the straw-coloured component of blood called plasma. This results in a decreased ability to fight invading microorganisms, toxins, or other foreign substances. Immunoglobulins are produced by specialized white blood cells (B cells) as they mature into plasma cells.

As a treatment for her illness, Nadine relies on medication made from plasma. Medications like hers, known as plasma protein products, are in increasing demand in Canada, and they are derived from plasma donations.

Learn more about how plasma helps people in Canada

Since her diagnosis in 2015, Nadine has been receiving infusions of immunoglobulin, a specialized medication that is made from donated plasma. She gives herself the injections at home. Talking about the effects of the treatment makes her quite emotional.

“It has been life-changing and lifesaving. Not only does it reduce the number of chronic infections, but it also treats one of the autoimmune diseases,” says Nadine. “Since the increase in my infusions in March, the nerve pain has been reduced drastically in my legs, allowing me to get out for walks daily with my adult son. I’m hoping to kick the ‘hot wheels’ [walker] to the curb soon.”

How is donated plasma made into plasma protein products?

How can I become a plasma donor? 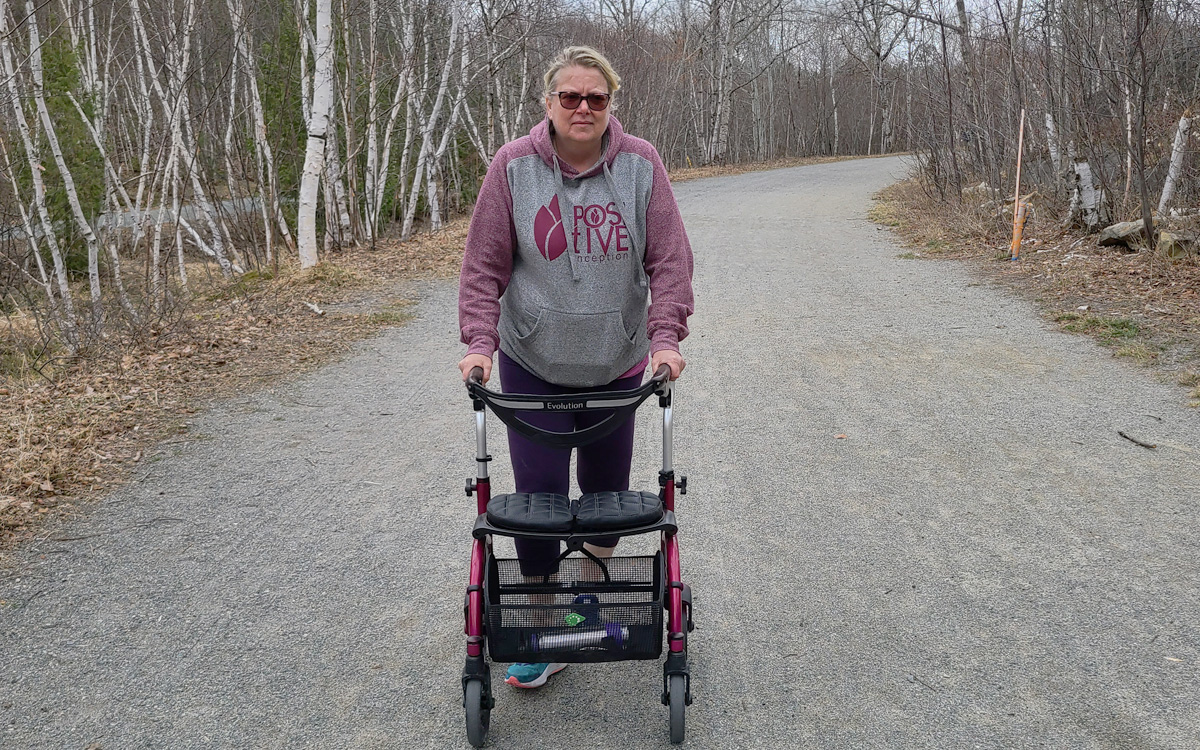 Nadine Law still relies on a walker for the moment, but she is slowly regaining her mobility thanks to a medication made from donated plasma.

Nadine attributes her improving health in part to her positive attitude. Staying connected to the community and advocating for other patients has helped her keep her spirits up. She is an active committee member with the Canadian Immunodeficiencies Patient Organization (CIPO).

“I have to make a difference for other people,” she says. “I have to take what I’ve learned in my health journey to help other patients not only survive, but thrive.”

Inspiring others to donate plasma

In December 2020, Nadine started volunteering at Canadian Blood Services’ plasma donor centre in Sudbury. Being around donors helps her feel connected to the people who are helping her thrive. In fact, it takes approximately 500 plasma donations to support one year of Nadine’s treatment.

“When I’m at the donor centre, I feel at peace mentally. Everyone is giving off positive energy. This feeling of peace and positivity keeps me going,” she says.

This video was filmed prior to the COVID-19 pandemic.

It was this feeling that inspired Nadine to celebrate her 50th birthday in March 2021 in a unique way. With the help of Teri-Mai Armstrong, business development manager at the Sudbury donor centre, she rallied friends, family and community members to donate plasma in her honour.

“Nadine had a lofty goal of 50 donations for her 50th birthday, and Sudburians answered her call with 62,” said Teri-Mai. “She spent her entire birthday at the centre volunteering, speaking to donors and thanking them. It was truly inspiring and many have started to donate regularly in Nadine’s honour. In fact, her team of 43 members is now up to 126 donations and counting!” 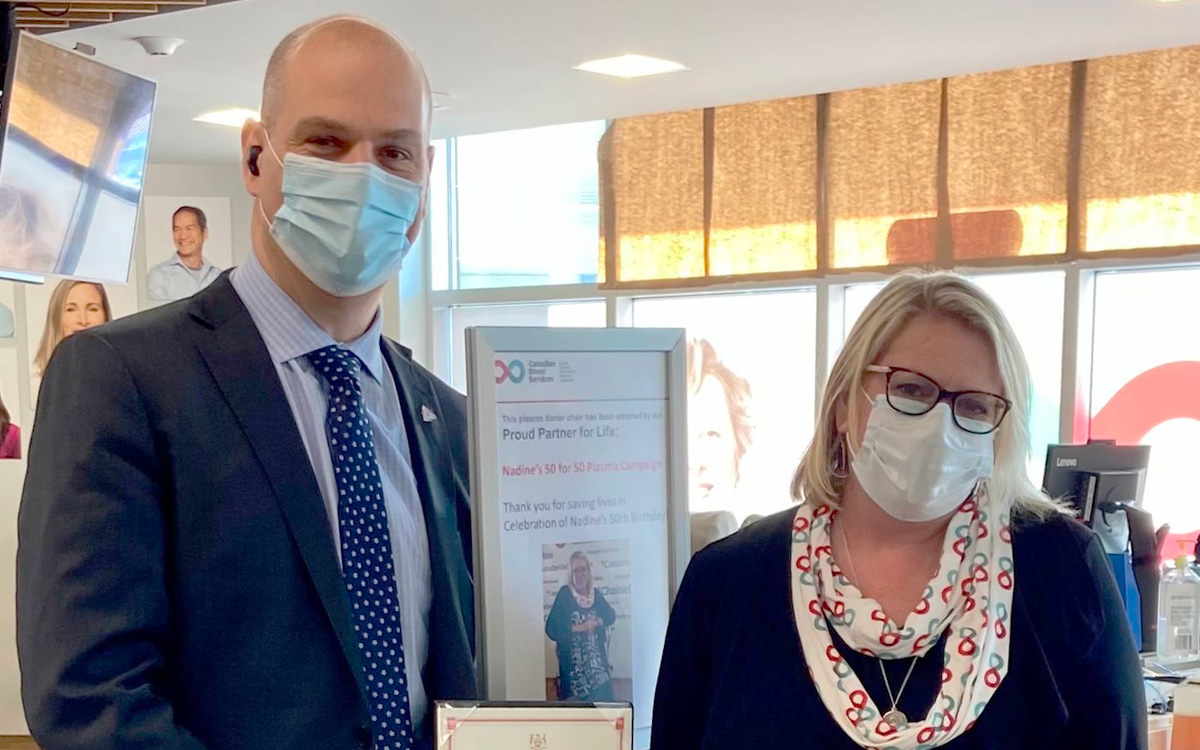 Jamie West, the MPP who represents Sudbury in the Ontario legislature, presents Nadine with a certificate of recognition for her 50th birthday at the plasma donation event in her honour.

Nadine is forever grateful to plasma donors and wants them to know that their donations are lifesaving. She only wishes that in her case, she’d been able to start her plasma-derived medication sooner. She hopes her advocacy can help make the journey easier for other patients.

“I will never have any way of knowing the difference that plasma products could have made in my younger years, but by creating awareness and advocating for plasma donations and treatment now, I can help change someone else’s future.”

Becoming a plasma donor can make a lifesaving difference to patients across Canada. To book an appointment, visit blood.ca/plasma, download the GiveBlood app or call 1 888 2 DONATE.

Are you a plasma recipient? We want to hear from you! Contact us at communications@blood.ca and we will be in touch to learn more about your story. 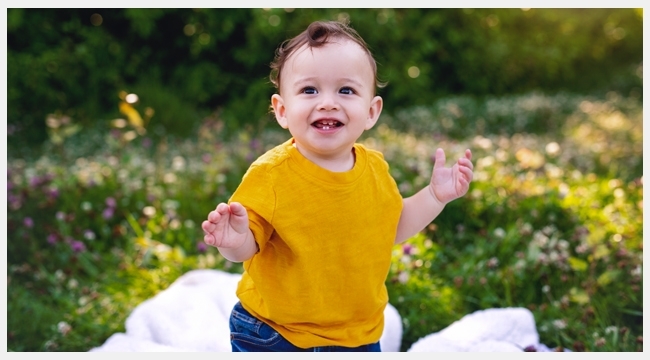 Jakob Guziak was diagnosed with SCID, a rare condition that threatens his life 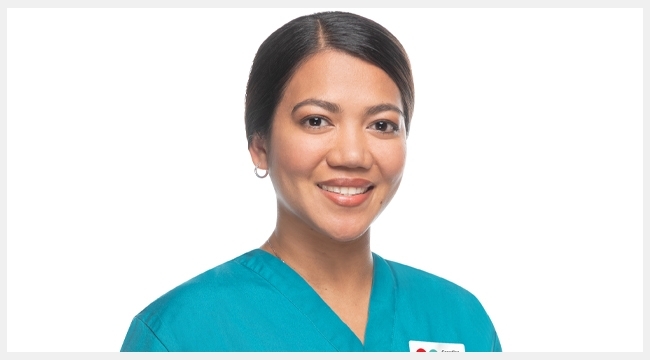 “Adaptability is the key to resilience.” 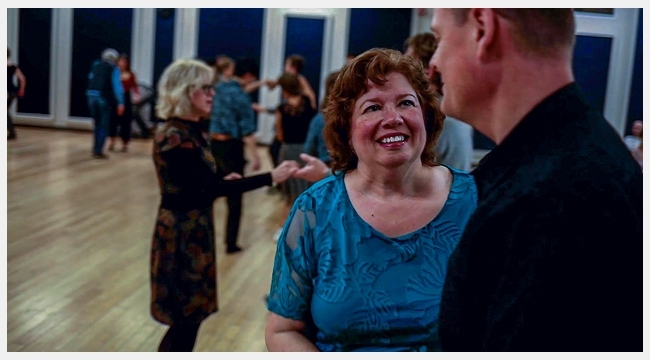 Linda Paul continues to recover from a rare immune disorder